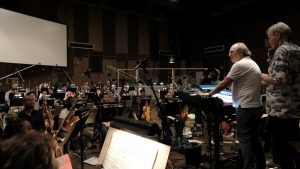 After 25 years, Hans Zimmer returns to The Lion King with the Re-Collective Orchestra, of which Allison was co-principal flutist. In a recent article, NPR revisits Zimmer’s Disney origin story, and his collaboration with the legendary Lebo M. (who contributed the iconic vocal and arrangement to the movie’s intro). Zimmer contacted Re-collective Orchestra after seeing the viral orchestral rendition of “All the Stars” from Black Panther, of which Allison also contributed flute. They recorded The Lion King soundtrack at Sony Studios last April. Stephanie Matthews, concertmaster and co-founder of Re-Collective Orchestra, stated in the article: “It’s really hard to describe the energy in the room, and what happened on that scoring stage, I mean, the representation and the diversity, but also the energy and the camaraderie, and then just using this shared language of music to translate and to transform this already super iconic score. It was just… it’s hard to put into words.”